Zero Waste programs can create jobs in your community—whether you’re in a large or small, urban or rural area. And, Zero Waste programs strengthen your economy by keeping dollars and materials circulating through your region. Here’s why everyone from small towns all the way up to the United Nations is embracing Zero Waste programs as a strategy to drive economic development.

On a national level, the US recycling industry generates $117 billion in economic activity annually. According to the EPA’s 2020 Recycling Economic Information (REI) Report, recycling and reuse activities in the United States accounted for:

Economic Impacts of Recycling at the State Level

More than a dozen states have reports on the economic benefits and job creation from recycling within the state. Here are a few highlights and resources for more information:

The US Could Create 1.1 Million New Jobs by Recycling 75% of Our Discards

Recycling, reuse, and manufacturing jobs are critical to meeting our local, state, and national goals to create more green jobs. Recycling creates strong job growth and opportunities for entry-level and mid-level workers, and can replace jobs lost in manufacturing. Jobs in the recycling industry typically have a low barrier to entry and offer an average of over $70,000 in wages and benefits.

To learn more, check out the report “More Jobs, Less Pollution: Growing the Recycling Economy in the U.S.,” which details how transforming the “waste” sector into a “materials management” sector will support the economy and the environment.

In addition to providing jobs directly in the recycling sector, Zero Waste gives value back to the community by keeping materials—and dollars—out of the landfill. Every ton of trash that gets buried in your local landfill contains products like paper, plastic, and metal that could have been sold for recycling. That’s money that could have supported community and local businesses. The US buries over $11 billion every year in potential revenue from materials that were trashed instead of being sold for recycling. 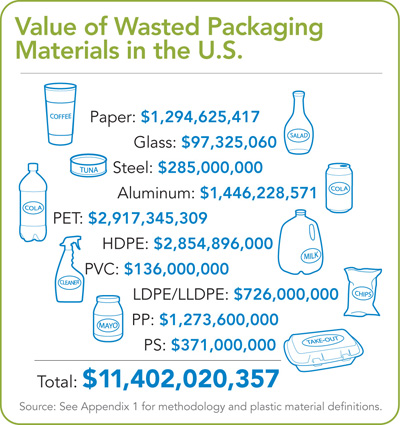 Paper, plastic, cardboard, and other materials that are buried annually in US landfills could instead have been sold for over $11 billion, adding value back to our local and domestic economy.

1. Collecting, processing, and preparing materials. Your discarded materials are picked up and then brought to processing facilities where they are sorted and prepared to sell to markets.

Examples of Jobs from Recycling and Reuse