We Need an End to Receiving Disposables by Default

We may worry about the waste we make at home, but when we’re out and about running errands or grabbing a bite to eat we can easily end up with a plethora of single-use waste—products that were designed to be used once, sometimes for mere minutes, and then tossed. Things like plastic checkout bags, wads of napkins, plastic forks and spoons, extra soy sauce packets, disposable chopsticks, paper coffee cups . . . do we really need all this stuff?

For most of us, the answer is “no.” But in the name of serving the customer with the utmost convenience, establishments will hand out these products whether we ask for them or not.

Convenience, but at what cost?

We’ve become so accustomed to being on the receiving end of these items that we don’t stop to wonder “How was this product made?” or “What’s going to happen to it after I use it?”

Unfortunately, most of the single-use disposables that make their way into American trash bins have a dark history and a sad future: They’re mostly made from finite, nonrenewable resources (think natural gas and petroleum).

The production and disposal of single-use items, especially plastics, are clogging up our waterways and oceans, killing wildlife, adversely impacting our climate, and taking tremendous tolls on ecosystems.

We Don’t Need to Litter Our World with Disposable Trash

Here are two simple, Zero Waste actions against disposable waste you can take each day: Refusing them in the first place and choosing reuse over single-use items.

Refuse to Accept Garbage You Don’t Want or Need

When we REFUSE to accept single-use disposable items and let restaurants and businesses know to please not include these items before we receive them, we’re taking a stand against a system designed to create trash. We are sending a message to establishments that consumers don’t want to be given garbage they may not want or need, and doing our part to reduce our own waste footprint.

In place of single-use disposables, we can choose to REUSE. This can be as simple as choosing not to use an item only once—such as salvaging a glass jar from the recycling because it’s still useful to you—or can mean investing in a product specifically designed for reuse, such as reusable napkins, utensils, straws, and to-go coffee cups (bonus points if you acquire it secondhand!). Studies show that these “reusables”—sometimes called “durables”—are better for the environment than their single-use counterparts. Even though reusable items need to be washed, they are demonstrated to consume fewer resources, including water, than comparable single-use items over their life cycle.

Go for Zero Waste today by changing your habits to include durable goods! 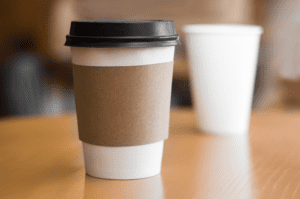 They’re generally made from trees, not recycled paper, and in most cases they are bleached white with chlorine, a process that releases dioxin, one of the most toxic chemicals on the planet. Paper coffee cups are usually not recyclable, and when they are disposed of in a landfill they emit methane, a greenhouse gas far more potent than carbon dioxide. (Compostable coffee cups exist, but they’re certainly not the norm.)

The use of disposable coffee cups is prolific: Starbucks alone produces 4 billion each year (and what’s worse is this number could potentially be as high as 6 billion, according to a Starbucks release).

Instead, REUSE . . . Invest in a stainless steel reusable mug to keep your drink warm and reduce your paper coffee cup waste. 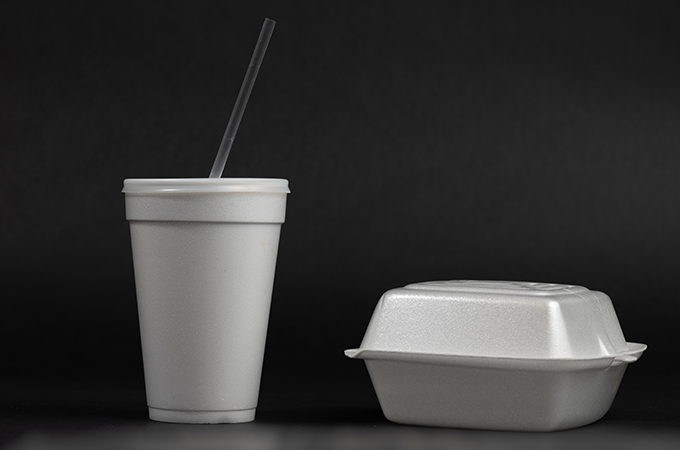 Polystyrene is bad for you, the planet, and the people who produce it. Its basic component, styrene, is a possible human carcinogen, a hazardous air pollutant, and can cause nervous system impairments among industry workers.

Styrene can leach from containers into your food. Additionally, polystyrene recycling is not widely available, and it never biodegrades; it simply breaks down into tinier and tinier pieces, polluting the environment and harming the animals that mistake it for food.

Instead, REUSE . . . Bring your own food containers with you when you go out to eat! 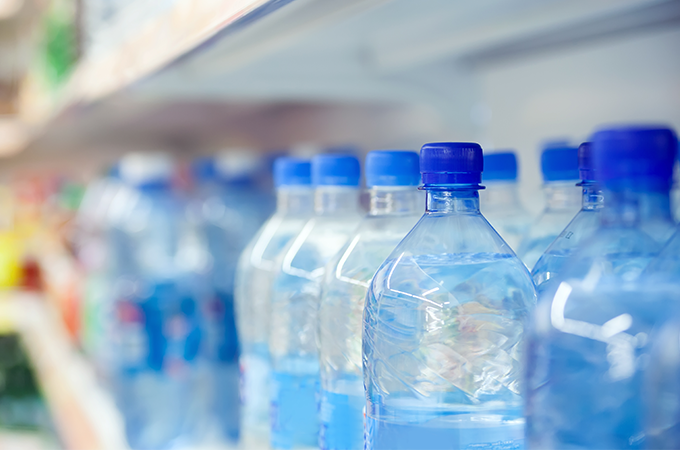 This single-use item is a poster child for unnecessary waste. Six to seven times more water goes into manufacturing and filling bottles, filtering water, and cleaning the bottling facility than goes into the bottle itself.

But water isn’t the only resource wasted: It takes more than 17 million barrels of oil per year to produce the plastic for bottles. In the US alone, we’re consuming 1.7 billion bottles of water each week, and the final kicker is that less than 30% of these bottles are recycled.

Instead, REUSE . . . Bring your own water bottle with you wherever you go!

If you need or want a water filtration system, consider an under-the-sink reverse-osmosis system, or a freestanding unit such as a Berkey Filter. 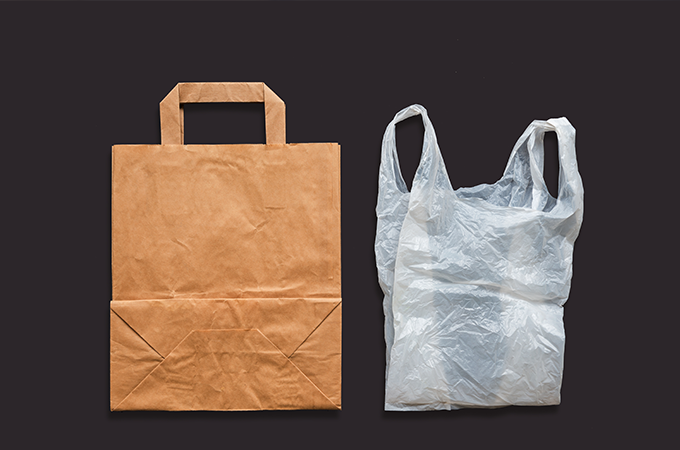 Banning plastic bags is a hot topic these days, but many don’t realize paper bags can be just as bad—or worse—for the environment.

Paper bags use more energy and create more water pollution during production than plastic bags. Plastic bags are made from nonrenewable fossil fuels, fewer are recycled, and more are used—nearly 2 million every minute! It’s a lose-lose any way you look at it.

Keep it in your car/bike/backpack/purse so you don’t forget it, and even if you do—don’t be too hard on yourself! Keep practicing, and before you know it, it will become habit. 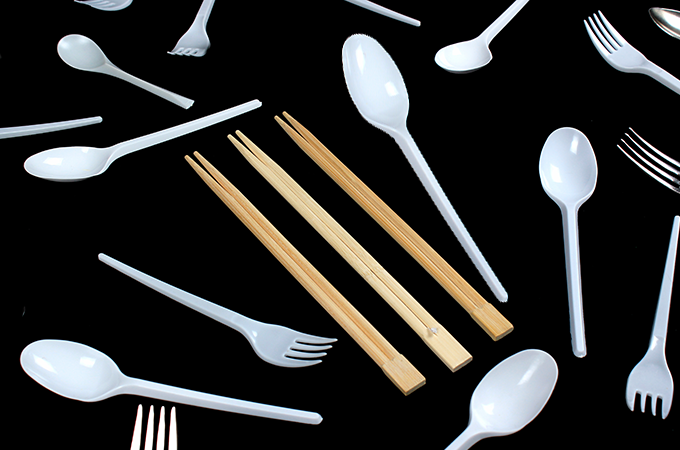 These ubiquitous take-out items are made from finite natural resources like petroleum and trees. An estimated 40 BILLION nonrecyclable, petroleum-based plastic forks, spoons, and knives are used every year in just the United States! Disposable chopsticks used here and around the world contribute to deforestation: In China alone, the equivalent of 3.8 million trees are used to produce upward of 57 billion pairs of chopsticks each year.

INSTEAD, REUSE . . . Bring your own utensil set.

Find a to-go utensil kit, get yourself a deluxe spork, buy some used dinnerware from your local thrift store—or simply grab a reusable fork, spoon, and any other utensil you need from your kitchen drawer—wrap it in a reusable napkin, and call it a “kit.”

Once you get in the habit of reuse, you’ll be surprised how easy it is and the difference it makes in the amount of garbage you prevent and the important message it sends to businesses! 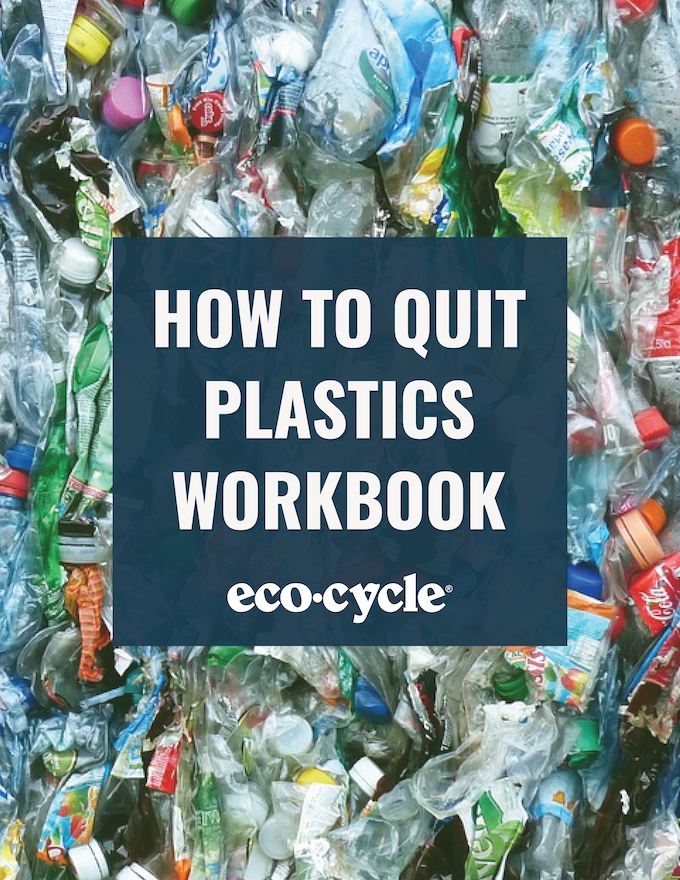 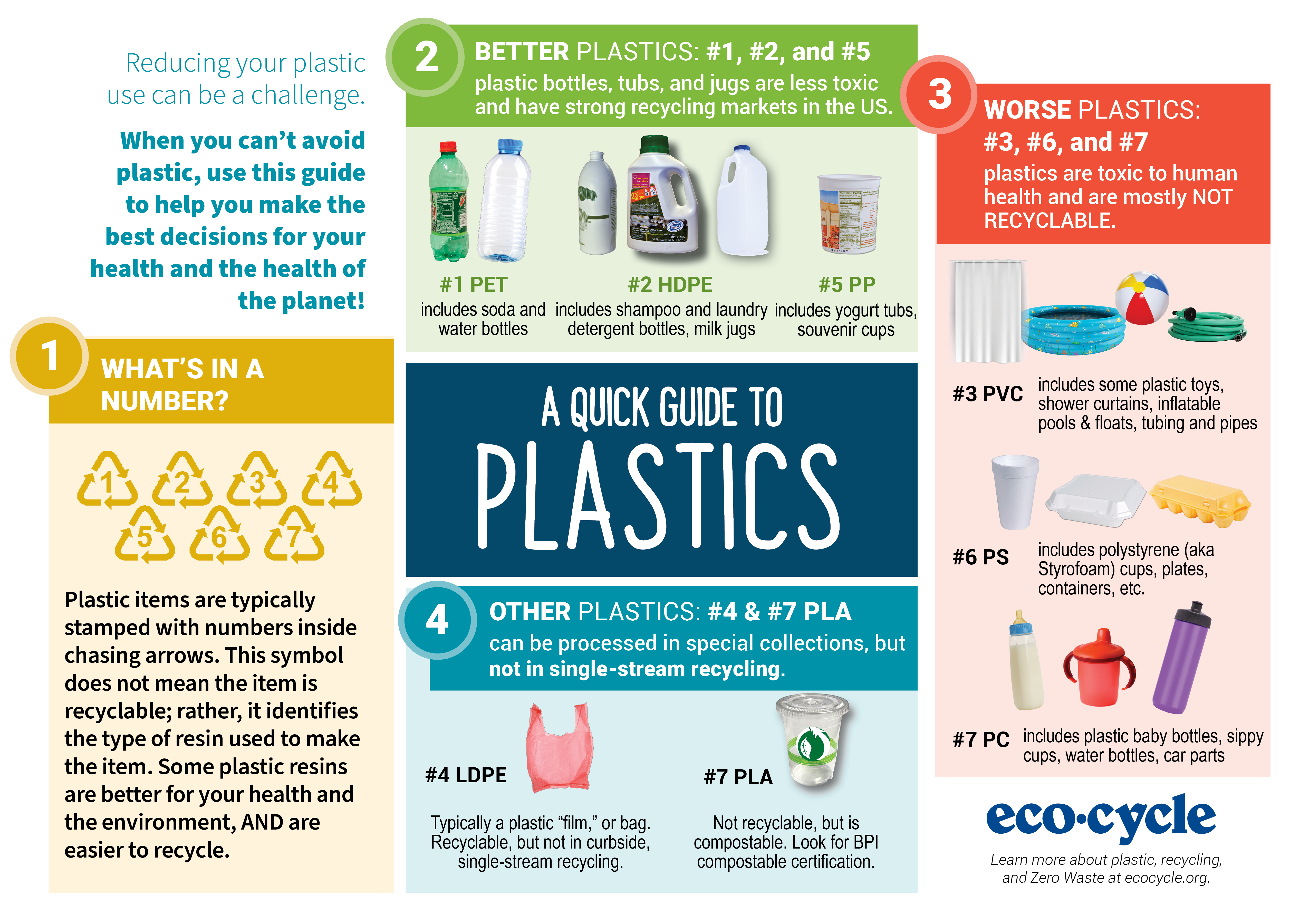 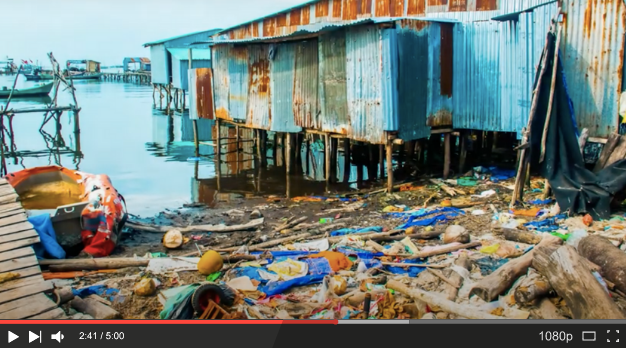 Video: The Downstream Impacts of Plastic 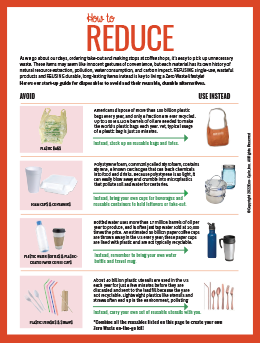 Eco-Living Guide: How to Reduce